Burger King has a loyal customer base around the world, including Finland. However, until now, Whopper fans have had to rely on traditional channels for their burger orders, which often lacked a personalised and satisfying customer and brand experience. Restel Oy, the company that represents Burger King in Finland, recognised this and wanted to create a custom app for the brand that would bring the loyalty programme and other benefits directly to Whopper fans.

Restel wanted to improve and own the overall customer experience and decided to create a custom app, to make the Whopper-loving journey even more satisfying. The Burger King Finland app aims to provide customers with a satisfying mobile experience by offering unique deals and discounts tailored for app users.

Restel decided to rely on Codemate and use existing software building blocks and the benefits of Flutter technology known for its speed.

To ensure that the goals were met, user- and technology studies were conducted to identify potential challenges and to optimise the user experience and loyalty programme. The team worked to streamline the user flow and to make the rules of the loyalty programme clear and compelling. Ideas, loyalty programme rules, and the drafted user interface were refined based on feedback.

On the technology track, rapid prototyping was used to test the compatibility of the new Flutter technology with the existing system backend and other necessary elements. The team was pleasantly surprised to be able to complete the first orders within a few weeks of starting the project, which is a faster pace than is typical for mobile app development. Based on this early exploration, some necessary rework was identified for the Burger King menu component, as this was seen as a crucial element for providing a stable service to customers. 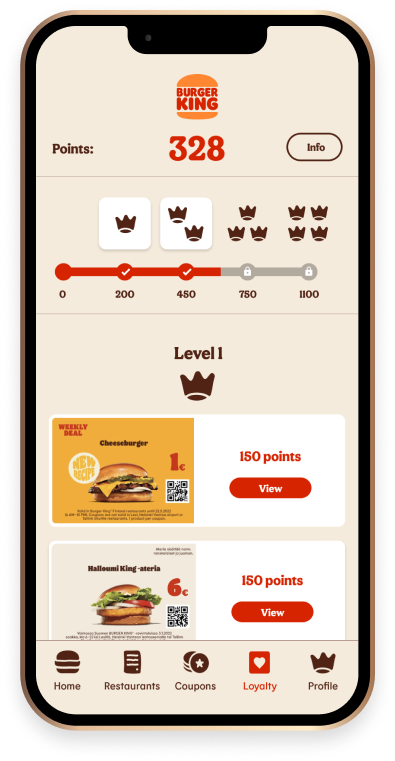 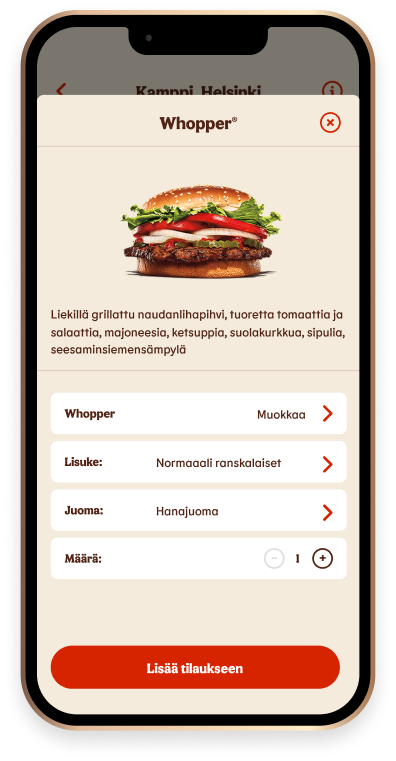 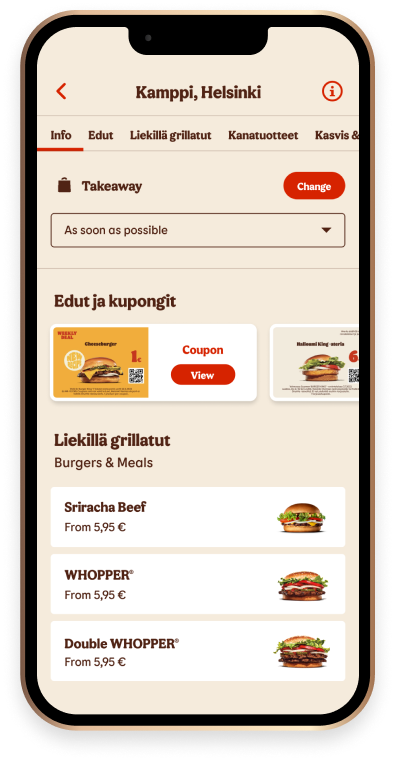 The Burger King Finland app was developed in 3 months with 2 developers and 1 designer through close collaboration between Burger King and Codemate teams. Our approach minimised risks with cross-disciplinary teamwork and shared responsibility for quality. The user interface was developed in an agile manner with a focus on the expected user benefits of the loyalty programme and coupons. The app’s visual identity was crucial for maintaining a consistent brand experience.

The technology demo was prepared to ensure data flows correctly and the app was able to utilise existing technologies with the new mobile UI and menu system. The team focused on value-adding features and will continue to improve the app based on user feedback, sales figures, and download figures.

(don’t worry, this is just a demo)

*For the best experience, make sure you use the latest version of your browser.

The Burger King Finland app has seen a significant increase in downloads since its launch. The sales generated through the app are in line with expectations, and we have received positive feedback from consumers. We have also received suggestions for further development. By closely monitoring this feedback, along with input from the Burger King team, we are able to identify ways to improve the app even further. We want to make sure that the app is as satisfying as biting into a hot and juicy Whopper.